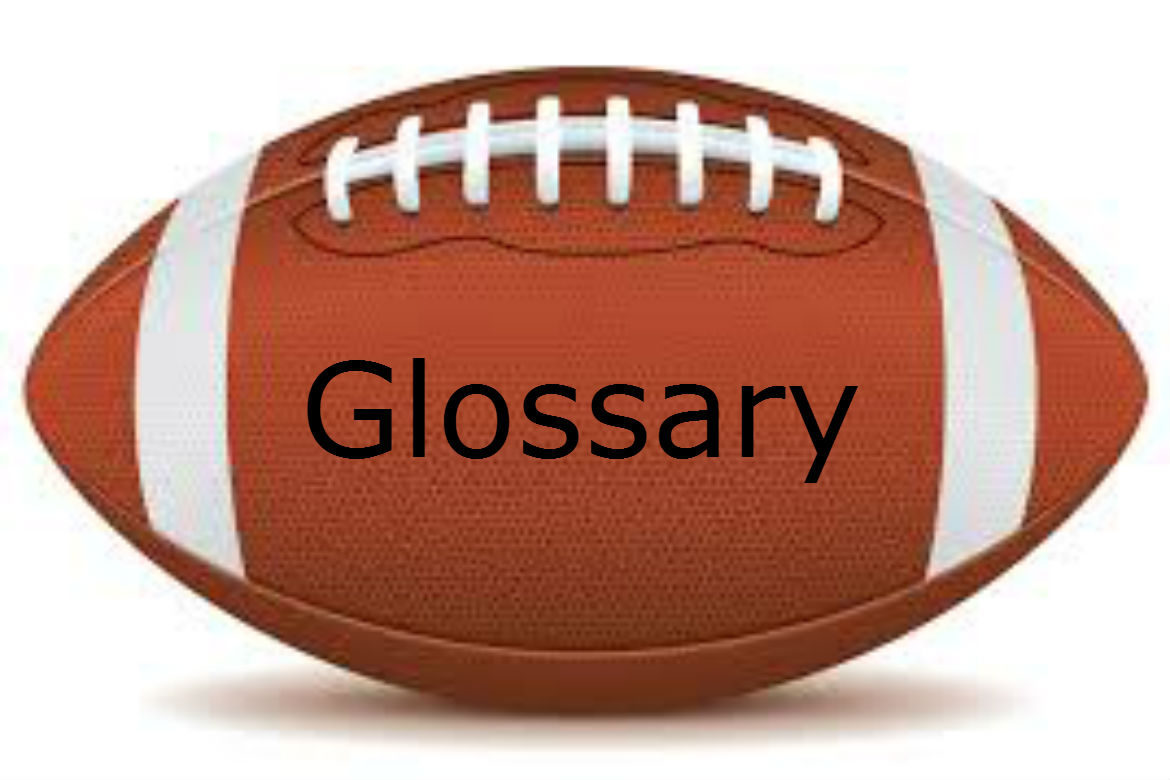 As we go through the “Announcer Alterations” I will keep an up to date glossary of all the terms used.  I also want to encourage others to include their suggestions on different ways to vary vocabulary and I will include those suggestions in the glossary as well.

Run up the middle: Up the gut; Down the chute; Down main street; In the thick of it; Down their throat; Behind the center; Into the heart of the defense; Straight downhill; Belly play; Up the seam; Into the pile; Into the teeth; Inside run; Tries the interior; Between the tackles; Among the big eaters; Punches through the line;

Runs to the outside: Turns the corner; Finds the edge; Outside the tackle; Sweeps R/L, Loups R/L;

Follows a blocker: With a convoy; With teammates paving the road; Follows the leader;

Churns the legs: Keeps the train chugging; Keeps the butter churning; Pumps the pistons; Chops the cleats; Tills the turf; Pumps the bellows; Keeps the wheels rolling; Pushes the pile;

Breaks a tackle/makes a guy miss: Pops free; Sheds a tackle; Escapes; Powers through; Eludes; Evaporates; Melts away from;

Runs at an angle: Angles; Slants; Diagonal; Curving; Projecting; Sweeping towards; Banking; On a trajectory towards; Sweeps; Peels;

Accelerate: Pedal to the floor; Steps on the gas; Presses the NOS button; Eating dust behind; Runs like he stole something; Burst of speed; Zooms; Zero to sixty; Turns on the jets; Jumps to warp speed; Comes out of the blocks; Zero to sixty;

Breaks Away From The D: In front of the pack; Making a bid for freedom; Running towards the light; Green grass in front; Pulls away;

Thrown into a tight space: Tight window; Dropped in a bucket; Threads the needle; Squeezes in; Dials in; Pipes it in;

Breaks Up A Pass: Separates body from ball; Deflects; Bats away; Gets a hand in;

Interception: Picked off; Taken away; Plucked out of the air;

Gang Tackled: Engulfed; Into a blockade; Rounded up; Swarmed; Into a wall; Surrounded and pounded; Mobbed; Swallowed; Gummed up by the defense; Runs into a host of defenders; Into a collection of defenders; Barricaded; Puts up a road block;

Hands Off: Gives; Prescribes the pill; Dishes; Puts the bread in the basket; Puts it in the gut; Makes the transfer; Dispenses the pigskin; Doles; Makes the exchange; Distributes; Swaps; Deals to; Forks it over; Quarries the rock to; Transfers; Feeds; Tucks it in;

Forced Fumble: Pried away; Wrenched out; Ripped away; Punched out; Stripped;  Jarred; Pokes it away; Discards; Swipes; Spits up the football; Plied from;

Pile of players fighting for a fumble: Mass of humanity; Avalanche of men; Dogpile; Peels off the pile; Stacked on the ball; A hill of humans;

Breaks/ avoids a tackle: Burst through; eludes; escapes; Houdins; Evades; Tears away; Rips free; Powers through; Gets greasy; Slips away; Shrugs off; Shakes away from; Slides away; like a gecko breaking it’s tail;

Made FG or XP: Clears the crossbar; Parks it between the lines; Parts the pillars; Splits the spires; Down main street; Between the pipes; Two hands in the air from both officials;

Crosses The Goal Line: Pierces the plane; breaks the plane; Inside the pylon; Breaks through the membrane; Crosses the chalk line; Gashes the goal line; Punctures the plane; Punches it in;

Tie Game: Knotted up; Even on the board; Dead heat; Playing to a draw; Wash; All square; Carbon Copy;

Running Back Position: In the sidecar L/R; Offset L/R; Dots the I;

Tight Coverage: Press; Blanket; On him like a cheap suit; Shadows; Mirrors; Straightjacket; Draped; Like white on rice;

The End Zone: Paydirt; The House; The heezee;

After an interception or defensive fumble recovery: Abconds with the prize.

Hand off: Feed the jukebox

Michael, thanks for the feedback. I’ll get these added to the list in the near future.

Reply
Football Resources and My Season Goals - SayTheDamnScore.com August 28, 2018 at 1:48 am

[…] Football Glossary: I’ve been working on different ways to say specific football phrases for almost three years. Feel free to use any and all of them freely. I also would love suggestions for word variations to add to the list. […]

Reply
Are You Ready For Some Football (And Other Fall Sports) - SayTheDamnScore.com September 3, 2019 at 2:23 am

[…] Football Glossary: My list of different descriptors for a wide range of football terminology. Useful in varying your vocabulary during games. […]