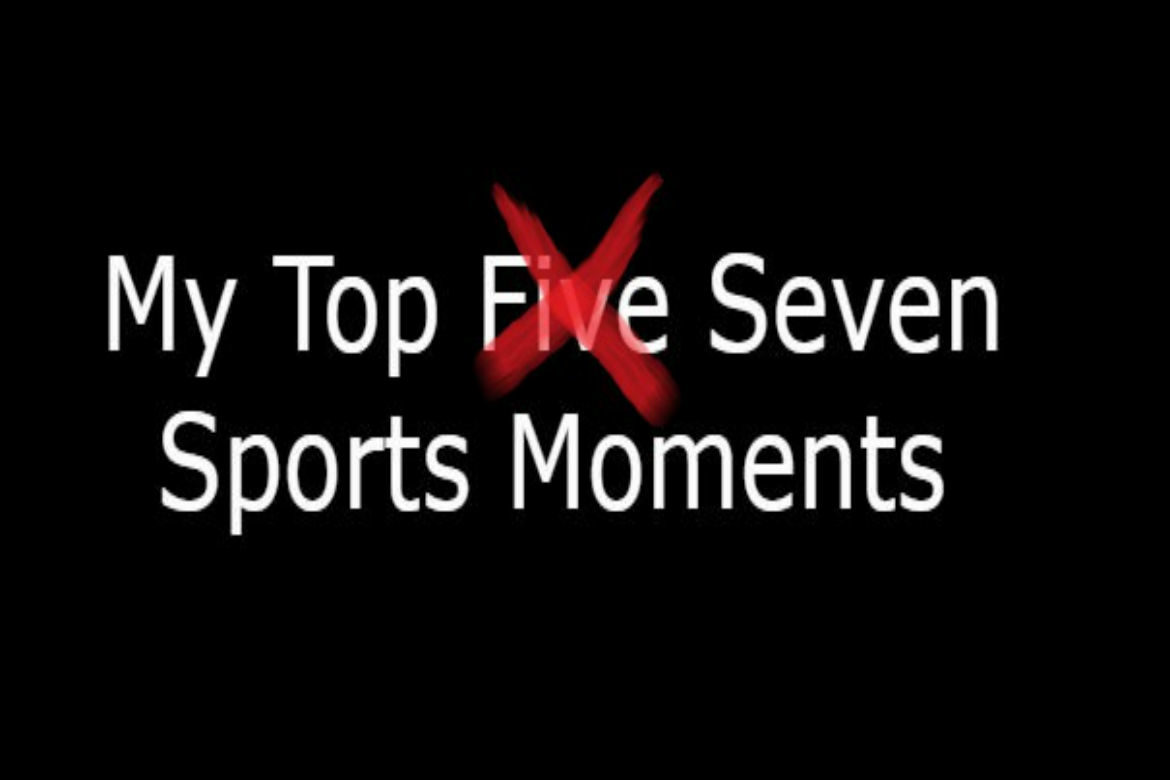 I hope everybody reading this had a very happy holiday season. For the first time since the move to Minnesota I was able to travel home to Nebraska, and it was great being around family and friends. One evening sitting around the table, my father’s Facebook memories on his phone showed an old post talking about my top five in-person sports moments,  and he asked me if they had changed. That led to reflecting on the last two years, and I decided that now was as good a time as any to update that list. Since I’m a sucker for nostalgia, instead of replacing two old moments, I figured I would just add two new ones. So without further ado, My Top Seven Sports Moments!

Eric Mirlis, author of “I Was There,” catalogued the top five sports events that 65 prominent sportscasters and writers witnessed in person. After recording a podcast with him (which can be found here), I started to think about what my top five moments would be. They aren’t as nationally prominent as the stories from Eric’s fabulous book (buy it here), but I think some of my experiences make interesting stories nonetheless. So here goes nothing:

This was the night I caught the broadcasting bug. Morningside had just left the NCAA DII North Central Conference and were in their 3rd year of NAIA competition. Every year, in men’s basketball they played old NCC opponent USD and got smashed. That year was supposed to be no exception — USD was ranked in the DII top ten and Morningside was unranked in the NAIA.

That was the backdrop for my very first student broadcast. I was still on the JV team and found out I could get paid by the work-study program to go watch the game. Morningside controlled most of the game, but a furious comeback by USD had them up one with just a few seconds remaining. Morningside heaved up a desperation three that was off the mark, but Brad Schmit, who would go on to become Morningside’s all time leading scorer, tipped in the miss as the buzzer rang. Not surprisingly, Morningside never found their way on to USD’s schedule again.

I’ve called many buzzer beaters since then, but this one will always stand out as the moment that I fell in love with sportscasting.

You truly never know when you may be watching something special. I couldn’t find the date or final score of this football game in a short Google search, but I know Heelan won in a blowout. I was doing color commentary for our sports director and we were both bummed by the loss and in awe of the Heelan running back, who put up over 300 yards on the ground.

Fast-forward six years later and that running back, Brandon Wegher, was on the active roster of the Carolina Panthers as they played for the Super Bowl. What we didn’t realize, was that Brandon Scherff, the tight end/defensive tackle for Denison-Schleswig in that game would go on to become the 5th overall draft pick for the Washington Redskins.

It’s exceedingly rare to cover a future pro athlete at the small school level in the Midwest. In hindsight I can’t believe how lucky I was to cover two in one game!

It’s not very often that you can say that you witnessed the birth of a football program. I was fortunate to cover Presentation during year one and needless to say nobody expected much from a ragtag group of mostly freshman, and a few transfer students.

The first few games went as expected. A pile of mistakes as both the players and coaches figured out what they were doing at the college level. More of the same was expected from most outside of the program as they went on the road to take on Martin Luther on the road.

Martin Luther was no powerhouse, but Presentation — with no seniors and just three juniors — were clear underdogs. The field in New Ulm, Minnesota, was unique. The crown was not in the center and instead lined up with the left hash, there was a mature forest just outside the far boundary, and it would not have been surprising if a deer had run out on the field in the middle of the game.

It was with this backdrop that Presentation recorded their programs first win, and in fact, kick started the program’s first three-game winning streak. It was a historic moment for the program and one I will always remember fondly.

I grew up ten minutes away from Omaha and it was cheap and easy to go to Creighton basketball games and as a child I became a big fan of the Bluejays. As an adult, my father and I started a tradition of making the drive to St. Louis and buying all session passes to the Missouri Valley Conference Tournament to watch the Jays.

In 2013 rumors were flying that Creighton would be moving to the new look Big East Conference. Nobody knew if this was it for the Jays in what was affectionately referred to as Arch Madness. We attended every single game of the tournament and watched Doug McDermott and Creighton beat arch rival Wichita State to win the Valley championship in what would turn out to be their last season as a member.

The games were great but what I’ll remember are the memories of spending time with my father. Whether it was begging him to stay up past his bedtime to watch a blues concert in the Soulard, using coupons to buy gut-churning concoctions from a place called Joe’s Chili Bowl, or making fun of the guy sitting behind us who would yell “Let them play,” every time the official called even the most obvious foul against the Bluejays.

It was both exciting and sad when the official Big East announcement was made and the conference tournament moved to New York. In the city, ticket prices went way up and travel became more difficult and expensive. Creighton is now in a league where competing at the national level is a realistic expectation, but our tradition died before it could really set its roots.

Presentation was in their second year converting from a bad NCAA DIII conference to a better conference in the NAIA. The men’s basketball team only won a few games the previous year and in 2015 had shown some pluck, but had not won a statement game.

It came down to the final buzzer when a promising young transfer guard nailed a three at the horn to win a tough game at Valley City State. The team went crazy on the floor, I went crazy with my call, and that game propelled Presentation to a 17 win season, falling just short of their first conference title.

This game took on added meaning the following summer when Cameron Isreal, the promising guard who made the memorable shot passed away in a tragic car accident, along with student assistant coach Terry Strong. It was a devastating blow to the team, community, and to me personally. They used my call from that game in the next year’s season opener as part of a pregame tribute video to the young men who left us to soon. It was a great honor, but I will always look back to that moment of pure joy in North Dakota and realize that it’s not how long you live, but what you do with your time here that is most important.

Like so many memorable moments, this one was completely unexpected. Vermillion High School was off to a good start on their season, and their star player, A.J. Plitzuweit, was establishing himself as a standout, but you could feel he hadn’t quite put it all together. On a special Friday night in January, both Plitzuweit and the team finally fired on all cylinders. He exploded for 52 points in the game, which is crazy enough on its own, but even more impressively, he scored 41 of those points in the second half! There are only 16 minutes in a half in South Dakota High School games, which means he scored over 2.5 points per minute! Making the night even more impressive, none of the points were empty. It was a six-point game that went down to the wire and every bucket was meaningful.

Plitzuweit has since moved on to play for an NCAA DII team that is transitioning to NCAA DI. Occasionally, I check his box scores, and I’m not surprised that he has had success as a true freshman. However, it will always be his scorching performance on a cold January night on the plains that sticks out in my memory.

This one is cheating a little bit because I wasn’t actually there in person. However, I spent the last two years (2016 & 2017) following my alma mater, Morningside College, as they tried to bring home the football program’s first national championship. They had great teams both years, but twice ran into the University of St. Francis, who eventually won both national championships. Both games were back and forth contests that USF won by a single touchdown playing on their home turf. Both games were absolute heartbreakers for two teams that had what it took to be champions, but came up short.

Fast forward to 2018, and I had given up the job covering Morningside by moving to Minnesota. I followed the Morningside football team from afar as they put together another seemingly special season. They went into the playoffs undefeated and ranked number one. After two early round blowouts, they reached the semi-finals, and standing in the way for the third straight season was none other than St. Francis! This time,  Morningside was able to host the game and after another see-saw battle, Morningside won by a Touchdown in overtime! They were on to the title game.

I streamed the video of the ESPN 3 broadcast of the NAIA National Championship game, which Morningside won by a touchdown over Benedictine. Seeing the players and coaches I had followed for two seasons celebrate in Daytona was bittersweet, but special all the same. Do I wish it would have worked out that I could have covered my alma mater as they finally got over the hump to win their first championship? Of course. But I’m happy for everyone involved, and seeing it happen from my living room couch in Minnesota was a moment I’ll never forget.