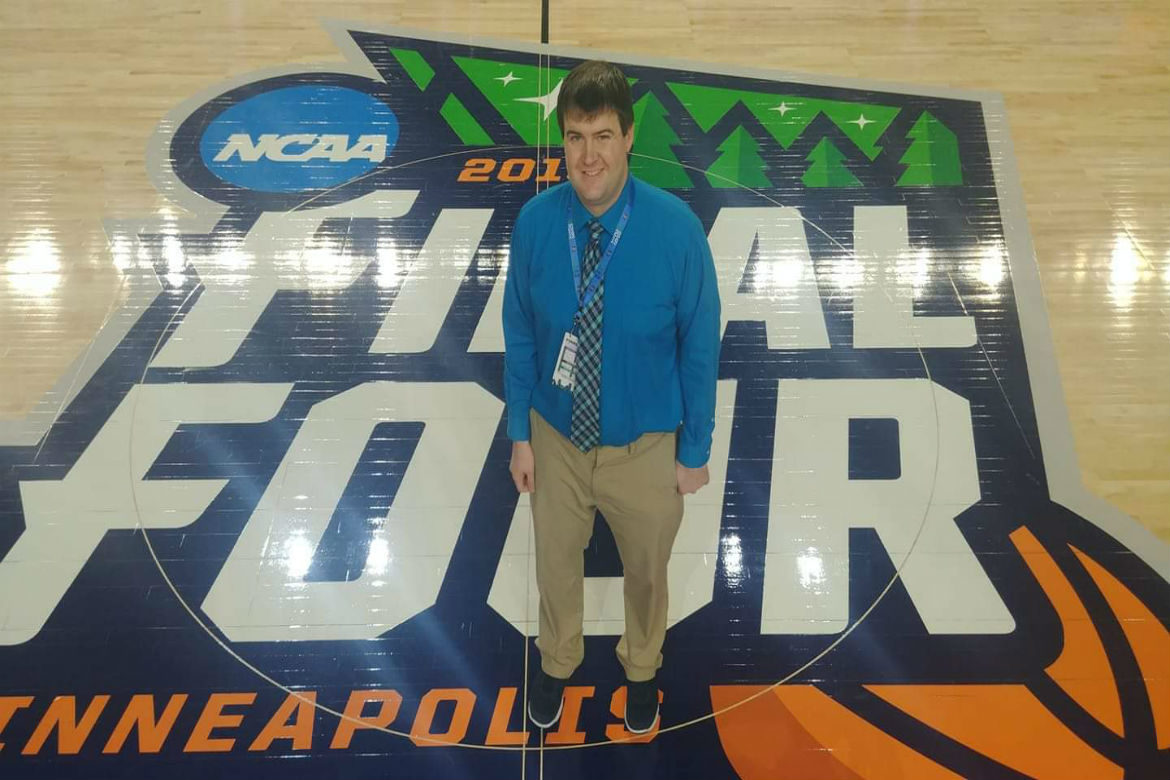 Occasionally, after nearly four years of writing this blog, it’s difficult to come up with fresh topics to write about. Sometimes there just isn’t anything exciting happening in my career. This week, inspiration was not a problem, as I’m writing this from the media room at US Bank Stadium in Minneapolis, which of course is the host of the Final Four! It’s probably easy to guess with my background as a washed-out college basketball player, but the Final Four has always been number one on the list of sporting events I would love to attend in my lifetime. I’ve had to pinch myself several times to convince myself that it’s real, but I’m here working as a production assistant for Westwood One Sports and getting paid to live the dream!

How I Got Here: So how the heck was I able to land this opportunity? It goes back several years to when I attended the NSMA Awards Weekend in North Carolina. Back then, Jon Chelesnik of STAA put on a seminar the day before the ceremony, and one of the presenters was Howard Deneroff of Westwood One Sports. I had a short conversation with him later that night at one of the networking mixers and stayed in touch by sending emails to him a few times a year.

Fast forward to after I had moved to the Twin Cities and realized that the Final Four was coming to town. I immediately tried figuring out how the heck to get in. As soon as I saw ticket prices, I knew purchasing tickets wasn’t an option, so it was time to get creative. The eventual winning strategy was simply sending an email to Westwood One Sports, asking if they needed any local help for their broadcast crew and being fortunate enough that they said yes!

What I’m Doing: After telling me yes, they had a role for me on the crew, they went on to explain exactly what it was that I would be doing, and it wasn’t glamorous. My job was, more or less, to be a runner for their sound team. It was my task to run cables back and forth between their upstairs production booth and the broadcast table.  They sent me to Jimmy Johns and Whole Foods to pick up food for the crew. I made copies, tested a few mics, and did whatever I could to make everyone else’s job easier.

In most situations, accepting this type of job would be a tough pill to swallow, but I also knew that going into it with a bad attitude would be a recipe for disaster. The reality is, this isn’t the type of position that is going to impress any Westwood One decision makers into hiring me in a future broadcast role. On the flipside, a bad attitude or sloppy execution could be the type of thing leaves a lasting negative impression that is hard to overcome. With that in mind, I tried to embrace the role, anticipate needs, and do the simple tasks required with a smile. Not a hard thing to do when you’re surrounded by such a cool atmosphere.

What I’ve Learned: The first observation that surprised me is how immensely complex a Westwood One basketball broadcast is. I had always assumed it was, more or less, the same setup you might see at an NCAA DI basketball game. I expected a Comrex of some kind hooked up to quality headsets, quality crowd mics, and a wireless setup or two. Westwood One goes way beyond this! They flew in a four-person audio production company from the West Coast whose sole purpose was produce great sound. They set up everything in a way that everyone can both hear the live call and go through talkback to everyone else. It took two full days to set up, test, and troubleshoot all of the connections. It was fascinating to see.

Second, I was able to sit in on a Westwood One production meeting and was floored by the level of detail and depth that they put into their pregame show alone. Every segment topic and interview is planned within a few seconds. The full stable of talent was at the meeting, so I was able to see behind the curtain a bit as to how Kevin Kugler, John Thompson, and Jim Gray go about their preparation process.

Last, I was surprised how little control the broadcasters had with their preparation schedules. It’s tough to have a conversation with anyone directly involved with covering games because they are literally moving from one interview or press conference to another the entire day. They also have numerous PR responsibilities that entail talking to sponsors and being interviewed for sports talk shows all over the country.

Saturday Games: Game day was hectic early, but once the matchups started, the broadcast went smoothly and there was nothing for me to do but lean back and watch the games. Hearing the roar of the crowd as Kyle Guy hit that third free throw for Virginia was far and away the coolest sports moment I’ve witnessed in person. The Texas Tech win was less dramatic but still exciting. The official attendance was over 72,000 people, and the energy, especially from the Red Raider faithful, was off the charts.

As I watched both games, I was able to listen to the broadcast feed through a spare pair of headphones in the booth. Seeing how much detail Kevin Kugler squeezed into his description while juggling a three-man booth was mind boggling. He’s always been one of my favorite broadcasters to listen to, but seeing everything up close definitely gave me even more respect for the immense talent Kugler possesses.

Championship Monday: The lead up to the national game was pretty low-key. We weren’t required to arrive until mid afternoon, but I showed up early to absorb as much of the environment as I could. I sat court side in the Westwood One Sports play-by-play chair and pictured what it would be like to call the game from that spot some day.

Again, the workload wasn’t strenuous, and I was able to relax and enjoy an incredible game. When it was all over, hearing “One Shining Moment” in person sent chills down my spine. I stayed with the crew until 2am helping to put equipment away.

Hopefully it’s not the last time I’m able to attend an event like this. If I fulfill my wildest dreams, maybe I’ll get to call it someday. Either way, I’m grateful that I was able to attend the Final Four. It was an experience I won’t soon forget.