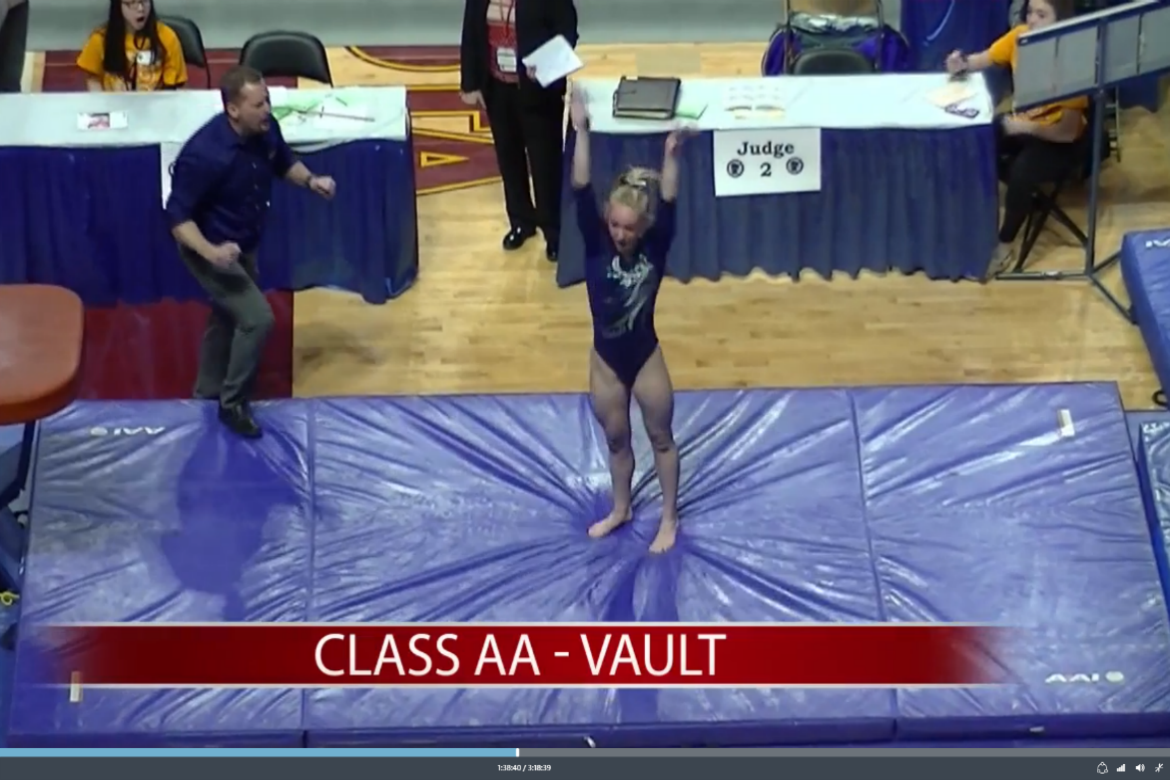 When making your debut calling an unfamiliar sport, often the goal is just to make it through the event unscathed. The thought that you might make a call documenting history is the farthest thing from your mind. However, that’s exactly what happened over the weekend when I covered the Minnesota State Gymnastics Meet, and a remarkable young athlete named Chaney Neu performed the first ever perfect ten on any apparatus in the long history of the state meet. More on that a little later, but first I want to recap the experience of diving in….err…..doing a full back handspring into my gymnastics debut.

It was about two weeks before the event that I received an email from a freelance web stream company asking if I was interested in being part of their coverage. I of course said yes, was assigned to cover the vault apparatus, and proceeded to panic. I can barely touch my own toes, needless to say, I know almost nothing about gymnastics. It was time to start prepping!

Prep: The first thing I needed to do was find somebody who had experience with the sport. I am a regular listener to Joel Godett’s podcast, Play-By-Play Cast, in which he has talked about covering gymnastics in the past. Joel was extremely helpful easing some of my nerves and making prep suggestions. He suggested taking a minimalistic approach, relying on the analyst when possible, and gave suggestions on what information to request from coaches.

Next I sent out over 50 emails, one to every coach with an athlete in either the team or individual competition. I requested three things: phonetic name pronunciations, what kind of vault they were going to perform, and what made their athlete  a standout gymnast. I received responses from about two thirds of the coaches. It was time-consuming, but organizing the information was a pretty straightforward process. The order of the athletes was predetermined, and I was able to crunch everything down to 24 pages of notes, one page for each rotation group in three meets. Analysts were booked to broadcast two of the three sessions with me, and I was ready to roll.

Butchering Day One: When I arrived at the arena, the first thing my supervisor said was, “I have bad news. You don’t have an analyst this morning anymore. We’re a body short.” Instead of leaning on an expert, I was thrown in the deep end to sink or swim. I was mostly able to tread water, but there were a few spots that did not go well.

To set the scene, I was high above the floor, and the athletes on each team all wore identical leotards without numbers or any way to identify who anyone was if you didn’t know the order. This team also happened to have several athletes with similar builds and hair color that looked alike from my lofty perch. This led to a moment during the team competition when either somebody scratched with no notice or scored high enough on their first vault that they didn’t complete their second without me noticing. This led to me announcing that the last vaulter was due to compete, but nobody was stepping up, and in fact, everyone was packing up. Somewhere in the rotation I ended up a full person behind where I was supposed to be in the order and had nobody to bail me out. There were a few other minor cringe-worthy moments, but that was definitely rock bottom.

Bouncing Back: After a rough day one, I called the Class A individual meet on Saturday morning and felt much better about the result. It was another solo effort, but I had a better idea of what to watch for and what landmines to avoid along the way. It wasn’t perfect, but it was a marked improvement from the previous day.

Calling A Historic Moment: For the Saturday evening competition, I was finally assigned an analyst, and it was glorious! We had instant chemistry, and he was able to inject expertise into the broadcast that had clearly been missing the first two sessions.

Fast forward to the fifth rotation when we had established a pretty nice rhythm. It was at this point that the aforementioned athlete, Chaney Neu, stepped up to the line. We were aware that she was the prohibitive favorite to win the all around competition and that a high score was possible. However, in 45 years of the sport in Minnesota, nobody had ever posted a perfect ten. I gave a few nuggets on her career as well as the score to beat, and I shut up as she made her approach.

When she stuck the landing on her vault it was clear that we had just witnessed something great, but it wasn’t until the first judge showed a ten that we started to realize the magnitude of what just happened. My analyst was going crazy in the best possible way, and I made the decision to not say anything and let him run with it. I barely said a word, but it might be one of my favorite calls I’ve made in my entire career. Could a few things have been better? Of course! But I think it captured the moment in an authentic way that captured the magic of the historic achievement.

Have you ever stumbled into calling a historic moment? Share your story in the comment section below.