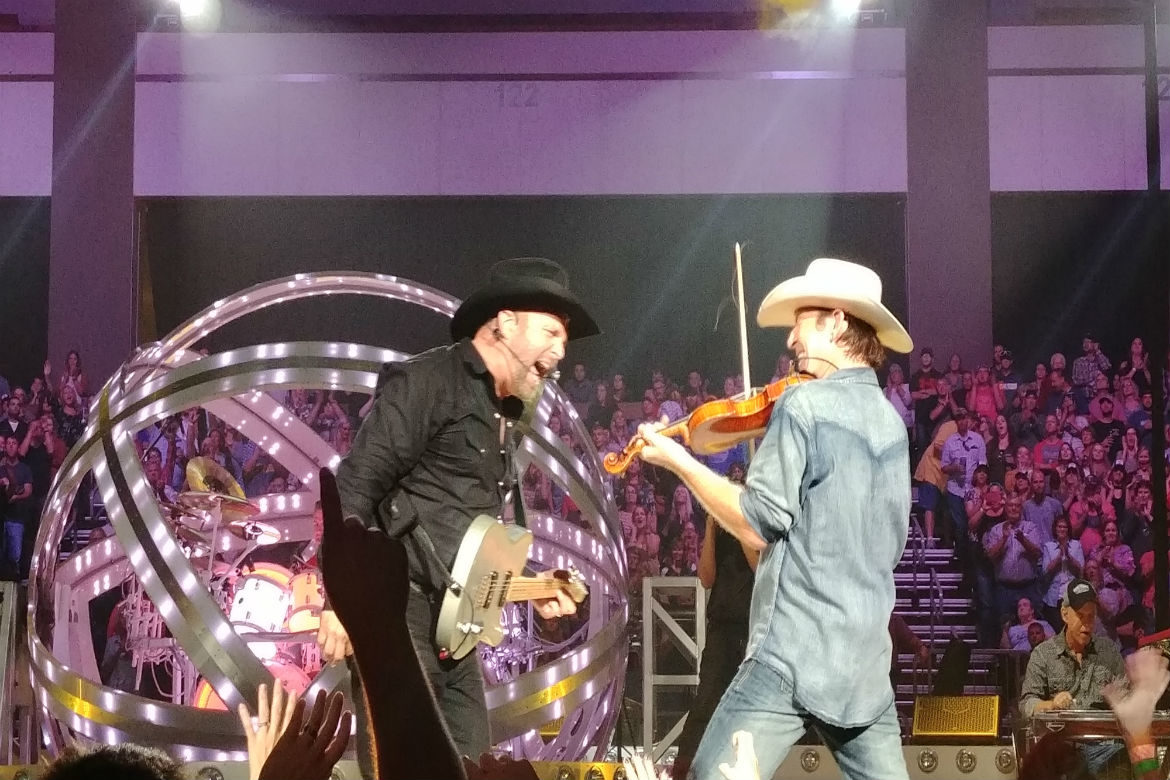 Saturday was a bye week for Morningside College football, which means that this weekend I got a rare Saturday off! For our bye week entertainment, my wife was able to procure tickets to the sold out Garth Brooks Concert in Sioux Falls. I’m not a fan of country music in general, but I love live music, and Garth has a reputation of putting on a great show, so I was excited to take it all in. The show was excellent, and we had a blast! On the car ride home, after a few drinks and more steak than anyone should ever consume, I got to thinking that there are many parallels in what it takes to put on a great concert that can be applied to broadcasting.

Energy: Garth Brooks has a huge collection of hits, but what made his live show great was his incredible energy. He galloped around the circular stage, punching the air, and seemingly using every muscle in his body to belt out his songs for three straight hours. The fact that this was a Saturday matinee, the second of five shows that weekend, would have given him a readymade excuse to mail in the performance. He could have saved energy for that night and the next day, but he didn’t. By the time he was done singing the same songs he’d been singing for over 25 years, he was drenched in sweat and looked exhausted as he walked off the stage.

Personally, my last three games have had final scores of 62-23, 42-0, and 34-6. It’s hard to bring great energy in those situations. However, there is no excuse to sound bored or uninspired. Somebody’s grandma is excited that her grandchild who doesn’t usually play made a tackle. Somebody is building depth for the future. Somebody cares, and they want the moment treated like it’s important. I wouldn’t advise galloping around the booth and punching the air, but there is no excuse for not bringing great energy at all times.

Treating Your Team Well: During some point at every live show I’ve ever been to, the featured artist takes a moment to introduce their band. Most artists treat it like taking out the trash or washing the dishes, something that just has to get done. Garth and his wife/intermission performer, Trisha Yearwood, seemed to really take pleasure in introducing their band. Most of them had been playing together since the early 90’s. At one point they introduced a bandmate as the rookie of the crew because he had only been playing for 21 years. Garth could not put on a top-notch show without the backing band, and he clearly appreciated the people he played with.

When you’re broadcasting a game, it’s rarely a solo gig. You have to build chemistry with your analyst. Even if your studio engineer is just a part-time high school student, they are still important to the overall quality of the broadcast. Depending on what level you’re at, maybe you have a sports information director feeding you stats. Maybe you have a spotter or sideline reporter. The point is that these people are working hard and deserve more than just a token name mention at the end of the broadcast.

Preparation: The concert stage was round, so at certain times certain people on stage would be facing you, and at other times they would be on the other side facing other concert-goers. The concert went over three hours and each member of the band was prepared to the point that they knew exactly where they were supposed to be without hesitation at all time. That type of preparation takes hours and hours of rehearsals and pre-planning.

In sportscasting the type of preparation is different. You obviously can’t preplan everything that will happen in a given game. What you can do is to be ready for every possible scenario with the information that you need. That can only be done with professional level prep.

Connecting With Your Audience: At the concert, Garth Brooks was able to make an incredible connection with his audience. He had to have made legitimate eye contact with everyone in the first 10 rows. He asked the entire crowd to be quiet so he could have a conversation with a middle-aged woman in the upper deck who was at the concert despite a brain tumor. He spoke to the crowd like he was talking one-on-one to an old friend. He really understood how to relate and form a legitimate connection with each and every person in the sold out arena.

During a broadcast you can build a similar connection. Always talk to the audience as if you were talking to a single person. Noticing signs and individual fans also gives broadcasters a chance to paint the picture. Telling the audience who has a funny sign, who is sitting down in a blowout, or standing and cheering in a close game is a way to connect with your listening audience by making them feel like they are there with you.

The final lesson learned from my bye week concert is to enjoy what you do and put your whole heart and soul into every game. Don’t preserve energy for the so-called big games. When it comes down to it, we are paid to watch sports, and if you can’t get up for that, then it’s probably time to do something else.