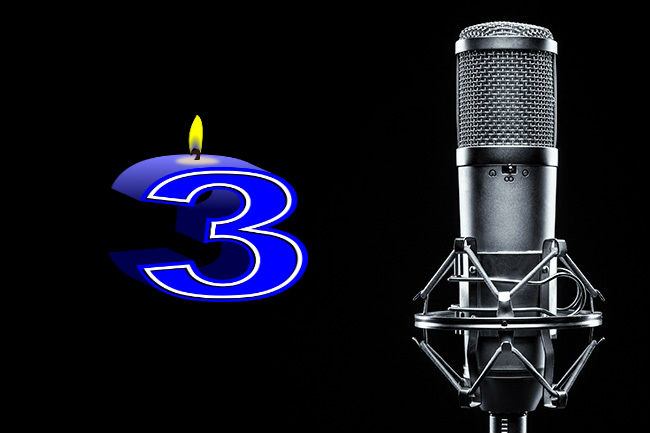 November 23rd marked the three year anniversary of the first post ever on SayTheDamnScore.com. The first podcast episode came a day later. Since then, it’s been a roller coaster ride in both my career and personal life. I’ve never completely understood why arbitrary dates like anniversaries lead to feeling nostalgic, but it’s as good a time as any to look back and reflect on the past, learn from mistakes, and appreciate the positive breaks and awesome people I’ve met along the way.

Calling My First DI Game: I’ve written about this before, so I’ll be short and sweet, but I called my first and, thus far, only NCAA DI basketball game last year when a friend needed a fill-in for Oral Roberts at North Dakota State. It was definitely a high point for my career thus far. It was only for one night, but the feeling of finally doing what I’ve strived to do for so long was exhilarating, and the brief taste was confirmation that I’m on the right track.

Talking To Bob Costas (And Other Industry Giants): Hearing the words, “Hello Logan, this is Bob Costas,” through the phone was mind blowing. I remember my first thought was, “How could he think anyone in sportscasting wouldn’t immediately recognize the voice of one of the greatest broadcasters of all time?”. My second thought was how dumb my first thought was, and, “How else would someone respond to a new person on the phone?”.

Bob has been one of my favorite broadcasters since I was a kid, and getting the chance to pick his brain for an hour was surreal. I very rarely get nervous, but on this occasion I was so nervous that I completely botched the podcast intro. He then said, “Logan, start over, you can do better than that.” I took a deep breath, did a much better intro, and actually ended up getting a full hour of time when I was only promised 30 minutes. It was truly an hour that I will never forget.

Doing this podcast has given me the opportunity to personally ask questions of numerous broadcasters from all levels of the business. Every one of their stories has provided some kind of experience or advice that is directly applicable to making myself and my listeners better broadcasters. I’m extremely grateful to everyone who’s come on the podcast, and I can’t wait to continue learning more as I move into year four!

Getting Married: No long explanation necessary here. The love of my life and I committed to take on the world together, and there is no way I could have made the decisions I have over the last year and a half without her support.

Taking A Leap Of Faith: Not every part of this decision turned up rosy, but there is definitely a level of satisfaction to leaving my small-market job and moving to a place to chase my dreams. There wasn’t, and still isn’t, any guarantee of long term success, but it feels great to know that I’m doing everything in my power to reach my goals.

Traveling Europe: I had never had more than a few days between jobs until this last year. When we made the decision to move without a job lined up , my wife and I decided to spend a month exploring Europe. The time we spent in Germany, Italy, and Greece was an incredible experience. The food, drink, history, and culture all added up to an unforgettable adventure.

Rights Loss: This is another topic that I don’t want to spend a ton of time on because I’ve already shared the story multiple times. However, looking back on the situation still makes my blood boil. In hindsight, could all of the positive things have happened since that day if I was still in Aberdeen? Probably not, but this was still a very difficult period in my career.

Homeless Month: Shortly before we left for our trip to Europe, we decided to buy a townhome instead of renting. That meant that because we had already given up our apartment in South Dakota, we had nowhere to live for almost a month while we transitioned to our new locale. This led to us couch surfing with friends, family, and whoever else would have us. There was a lot of ramen noodles and frozen pizza during that time but In the end, we found a nice place and are settled in. With that in mind, it’s not a month I’m in any hurry to re-live.

No Full Time Industry Job: For over a decade, I had been continuously employed as both a sales and sports announcer for local small market radio stations. After we moved to the Twin Cities, I’ve found consistent freelance work, but it definitely doesn’t pay the bills, which means I’ve had to work at Home Depot as a flooring associate. There is nothing wrong with working retail, but it obviously doesn’t provide the same personal fulfillment as working at a radio station. I’ve had several leads that wound up being dead ends and a very promising one around the corner (more on that next week). But it doesn’t take away from the frustration of being out of the business I love.

I’m sure there were many more high and low moments along the way, with many  more yet to come. But these are the ones that immediately stand out. Throughout the entire process, I’ve enjoyed (for the most part) sharing my thoughts, successes, and failures with you through both the blog and podcast. I’ve received such strong support from you that I only hope I’ve been able to return the favor with some valuable insight into the business of sportscasting. Thanks again, and remember, the next time you’re on the air, SayTheDamnScore a little bit more!

[…] last week’s post, I shared reflections of my three years writing about my career on SayTheDamnScore.com. After […]