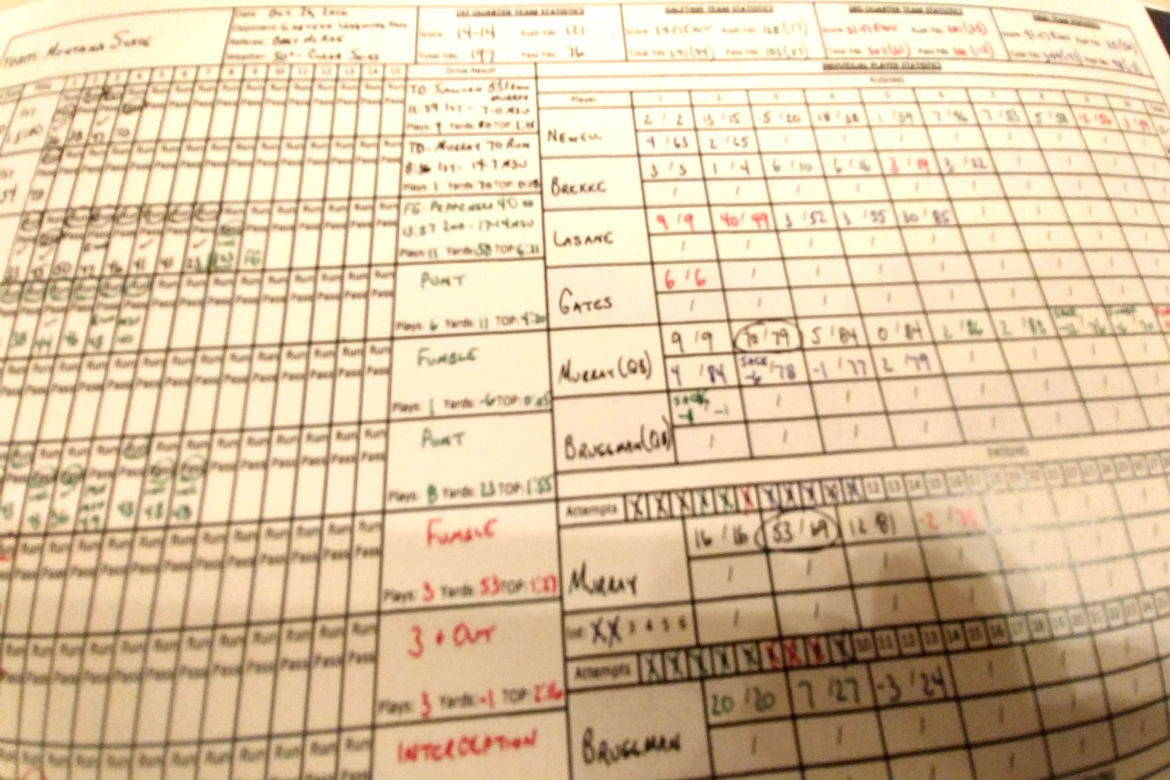 One of my friends who I frequently trade audio critiques with is a gifted broadcaster in many ways. He has great natural pipes, paints vivid pictures with words, and is one of the most prepared people I’ve ever been around. However, when listening to his audio, my main criticism was that he was sharing far too many stats. It was information overload and it didn’t allow for anything to sink in properly. It definitely didn’t move the story of the game forward in any serious manner.

I’m not saying stats and preparation aren’t important, but they have to move the story of the game forward. Otherwise, they’re useless. I’m only 32 years old, a young veteran in the business, so I certainly don’t know it all. However, I feel like this is an area of strength within my own broadcasts and thought it appropriate to share my philosophy on balancing stories vs. stats. On the other side of the coin, feel free to disagree and share alternative ideas in the comment section.

So what is the story within a broadcast? Maybe this shows my lack of intelligence, but it took me a while to understand what telling the story of the game really meant. I thought telling the story of the game meant having to uncover the juicy stuff! Like a player coming from a broken home and over-coming long odds to succeed, or a coach being inspired by his wife’s recovery from breast cancer. I thought the deep biographical bits were what made a broadcast pop. I was wrong!

I was increasingly frustrated with my calls because I thought my broadcast was suffering because I couldn’t find biographical info on high school athletes. I vented my frustration to another friend in the industry, and he laughed at me. I was taken aback, but his explanation was the light bulb moment I was looking for. He explained that it was much simpler than that. Telling the story of the game is simply explaining the context around every season, game, and individual possession. That’s it! I like to compare telling different aspects of a games story to zooming in and out on a camera. Sometimes you have to zoom in to capture the vivid details in a photo, while other times you have to zoom out and take a wide angle to put things in their proper perspective.

Zooming Way In: This is telling the story of each individual possession. It’s the easiest part, in my opinion, and takes very little preparation. Simply let the listener know why each possession matters within the context of the current situation. Is a team trying to cut a three run deficit to two? Is a team trying to stop a 10-0 run? Is someone trying to score their first touchdown of the game? It’s as simple as relaying what can or is happening that can change the game at that exact moment.

The Mid Shot: Each game is different and unpredictable, which is why you need to zoom out and tell the story of each individual game beyond the individual possessions. How is the game unfolding? The pitcher could be throwing a no-hitter, or a team’s leading scorer could be 0-10 from the field. You have to find the details that explain to a listener how the game has gotten to where it is at any given moment. This is also the point where stats start to become your friend. But more on that later.

The Wide Angle: Occasionally, what’s going on in the game requires context from outside of the immediate happenings in a given field or arena. That’s when you zoom all the way out to the widest of angles and tell the story of the season as it relates to the game. A few examples of this include saying that depending on the result of a game a team will move up or down in the standings, or sharing when an individual player is closing in on a milestone.

Combining the close, mid, and wide angle stories are where the art of sportscasting comes into play. At the end of a close game, the immediate action is enough to carry a broadcast. In a blowout you have to lean on the wider angle stories to find ways to keep the game interesting. Different things work for different broadcasters, and you have to find the balance that works for you.

So When And How Should We Use Stats?

Again there is no universal answer, but in my opinion, the right time to use stats in your broadcast is when it provides evidence as to why the story you tell is true. Think of yourself as a lawyer in a trial and your audience as the jury. You need to convince your listeners that what you say is credible, and stats are form evidence! For example, if you’re talking about how well a certain player is performing, it could be a perfect time to drop in a stat that illustrates that a player has a batting average of .350 over the last month. You could also use a stat to show the unusualness of a situation. When a player who’s a poor three point shooter catches fire and makes five consecutive treys, it’s a perfect time to say he only shoots 20% on the season. Every stat used on a broadcast needs to serve a purpose in supporting the story, and no matter how badly you want to use all of your prep work, sometimes you have to leave things out!

Season and career stats are usually readily available online or from a cooperative coach, but in-game stats can be tricky to come by. At the college level, you may get a live stat monitor that keeps you up to date, but at the high school level, I’ve found these to be exceedingly rare. This means that if you want stats, you have to keep them yourself. It’s pretty easy to keep simple stats, like points and fouls in basketball, and baseball is slow enough that keeping a book isn’t particularly challenging. Football is where I struggle to keep my own numbers. I’ve tried numerous scorecards and books and eventually got to a point where I gave up on keeping detailed stats and settled for just scoring plays.

It was about this time where my friend Jay Sanderson developed the aptly named, “Jay Sanderson Scorebook and Down Dial.” Before I go deeper into why this product is helpful, I want to be completely transparent and let you know that Jay and sportscastingsource.com have been a sponsor of this podcast. However, this is a product I love and have used myself for over a year, well before there was any sponsor relationship. His scorebook helped me to be organized and keep accurate offensive stats to use during high school broadcasts. His down dial also was an enormous help in quickly adding up big plays, especially when they cross the 50 yard line. For someone who is mathematically challenged like myself, this was a massive help to my broadcast. If anyone is interested in trying these products, visit sportscastingsource.com and you can get 10% off by using the promo code “score” at checkout.

Using stories and stats are what transform a sportscast from a linear reporting of a box score to a drama-filled source of entertainment for listeners. Just as everyone has their own style preparing for a game, everyone will have a different philosophy when it comes to using stats and stories. The most important thing is to find a style that works for you and your listeners.

What is your philosophy on stories and stats? Please share your thoughts in the comment section below.

Logan,
Enjoyed your piece about information shared during broadcasts.
In my experience, there are quite a few factors that influence what kind of information that can be added to the broadcast.
Baseball and softball always lends itself to more opportunities to drop in information, whether they be anecdotes or brief stories. It was best to try to drop in material that related to the game, such as how many batters the pitcher had retired in succession or the fact that left handed hitters had six of the eight hits the pitcher had given up. I also wouldn’t hesitate to drop in an item about a player’s background, such as the fact that his father was the PR Director for the area Major League Baseball team. Due to the pace of the game, the opportunities were present-more if the annnouncer was flying solo.
When it comes to football, basketball or hockey, the opportunities are far more limited, especially if two or more announcers are working. When you have football games with teams running no huddle offenses, or basketball or hockey games that go a few minutes between stoppages, sometimes you need to stop and take a breath.
In general, you have to do what works for you and that broadcast on that particular day.