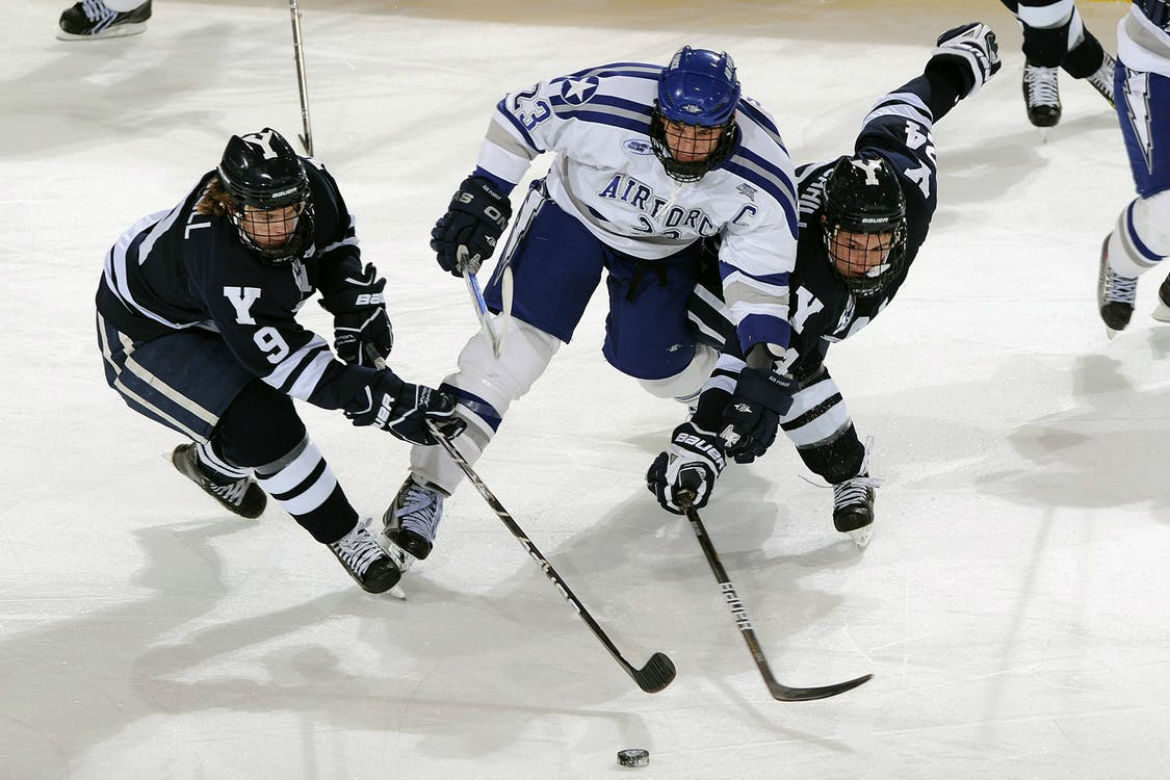 A little over a year ago, I wrote a guest post for Sportscasterlife.com. It was about my one and only hockey broadcast. The catch? I know almost nothing about hockey. I thought this was an experience worth sharing on my own page. Also, I encourage all of you to visit Sportscasterlife.com. It’s full of great resources for broadcasters at all levels.

I’ll start by giving you a bit of my hockey background … none. I’m the shortest of three men in my family and I’m tall at 6’4″. Needless to say, basketball was my passion growing up. Hockey players in my life were the crazy kids with missing teeth and bad hair who enjoyed the cold way too much.

Fast forward to 2011. I was hired as the football and basketball announcer for a small college in Aberdeen, South Dakota. Hockey is popular in South Dakota. There are several very successful major college programs within driving distance of Aberdeen, including the Minnesota Golden Gophers and the North Dakota Fighting Sioux Fighting Hawks. As a result, an entrepreneur bought the rights to a NAHL junior hockey team and started the Aberdeen Wings. I attended several Wings games as a spectator leading up to this surprise opportunity, but I always put more emphasis on drinking cheap beer than actually paying attention to the game.

Anyway, our station ended up with the broadcast rights for the Wings and our other sports guy, Adam St. Paul (Yup, native Minnesotan), was responsible for our hockey coverage. I continued in my role calling college football and basketball games. One day, Adam told me he couldn’t make it to a game and couldn’t find a feed, so I had to step up and cover hockey.

The first step I took was to hit up the local public library where I checked out “Hockey for Dummies” and read it cover to cover. It sounds silly, but it was probably the smartest thing I did through the entire process. I was able to learn all the basic terminology and on-ice locators. It also had a section on the culture and history of the game, which didn’t necessarily give me anything I used in the broadcast per se, but it did give me a better context of what this game meant to the people who love it.

My next step was to pick the brain of our regular hockey broadcaster. His best advice was to not try and give every touch of the puck. The game moves way to fast and you’ll end up missing important moments while you’re tongue tied. He was right! He also gave me copies of his spotting boards, but I didn’t like the layout and made a few calls to other hockey broadcasters and ended up settling on the charts used by Curtis Anderson of the UHL Sioux City Musketeers.

Once the game started, I felt like it went about as well as it could have. The rhythm of the game is pretty similar to basketball and after a few minutes I caught up with the speed. Upon listening to the playback, I noticed that I would occasionally revert subconsciously to basketball terminology, like calling the ice the floor. If I had another opportunity, I would do more group memorization of lines as opposed to trying to remember the entire lineup as individuals. The other thing I overlooked was not learning the referee penalty signals. I knew when there was a penalty but had no idea what was being called. I was lucky and got bailed out from this mistake thanks to the live stats program that, while delayed about 30 seconds, would eventually tell me what had been called.

People in the Dakotas are very nice people and probably were sparing my feelings and not being totally genuine, but I did get very positive feedback from fans of the team telling me I did a good job. Either way I enjoyed myself and developed a better appreciation for the game of hockey. I haven’t called a hockey game since then, but I’m better for it and I enjoyed the opportunity.

My First (And Only) Hockey Game: Covering A Sport For The First Time was last modified: May 9th, 2017 by Logan Anderson
Share: