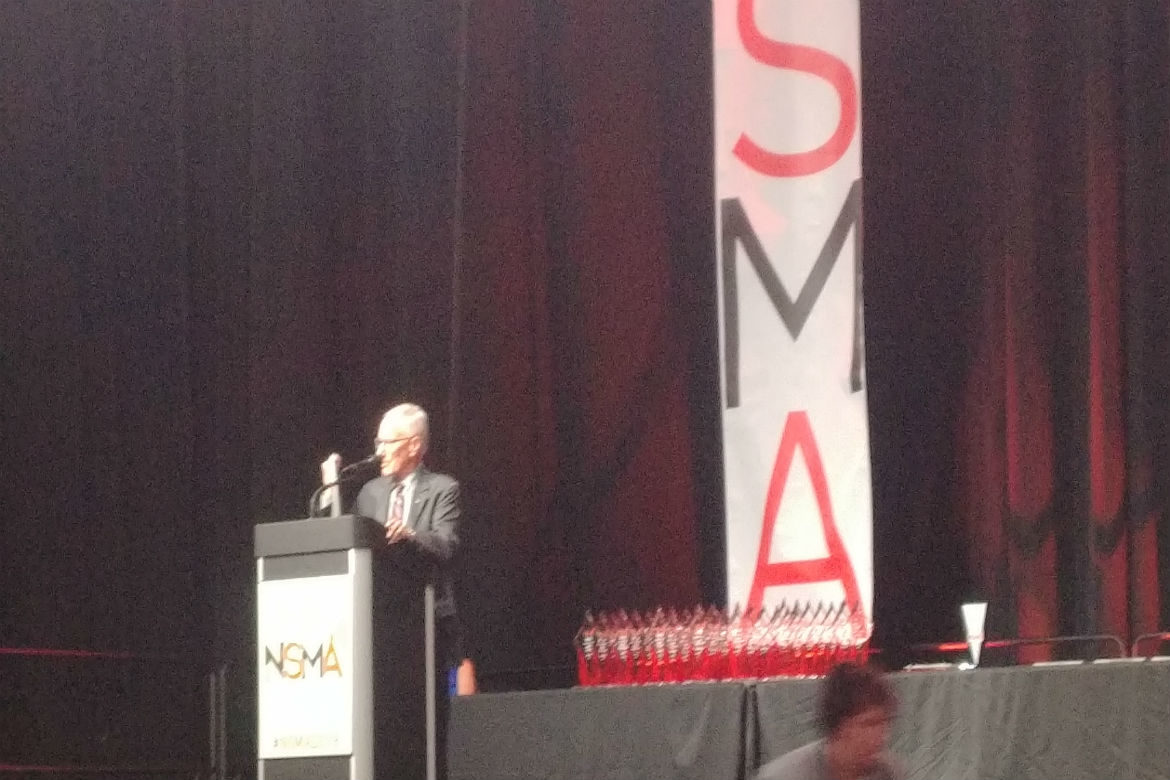 It was a true privilege to sit inside the Joel Coliseum on the campus of Wake Forest University as Doris Burke gave an emotional speech accepting her award as the National Sportscaster of the Year. She spoke about the people who helped her, the sacrifices her family made, and the need for more diversity in sportscasting. It was an inspiring moment witnessing what an amazing honor meant to one of the best sportscasters in the business.

It was her moment, but I couldn’t help closing my eyes and picturing what it would be like to stand up in her place. In my mind, I thought of the important people who have been there for me who I would thank on stage. I even choked up a little bit thinking about thanking my wife in front of the biggest stars in the business. It made me appreciate all of the people who have been there for me through the trials and tribulations of my journey so far.

Of course, the odds of ever actually being on that stage are infinitesimally small. A state award someday is perhaps more realistic, but it’s not the award itself that matters. Part of what I love about this event is that not only does it give every non-winner at the event something to strive for, but there are 50+ winners who prove that success and recognition can be achieved anywhere in the country.

Here are a few highlights from this year’s event:

Critique Session: After watching an excellent presentation from the great Doc Emrick, he offered to move to another room to take further questions. While it was tough not to follow the pack to absorb more wisdom from Doc, I decided to move to the critique room where I found Tom Boman of Learfield and Jon Chelesnik of STAA with just one other person. We both received detailed critiques of our work from one of the best broadcast coaches in the biz and a top decision maker. The feedback I received was very positive but also included a few areas to work on to continue to improve. I certainly would have liked to hear more from Doc Emrick, but zigging while everyone else zagged proved to be even more valuable.

Big Names: I’ve written before that it’s the friends on their way up at these events that are the most valuable, but that doesn’t mean it’s not cool to be able to talk with some of the greats! I was able to have conversations with the likes of Bill Roth of ESPN, Dave Sims of the Seattle Mariners, Wyatt Thompson of Kansas State, and many others. Matt Park of Syracuse and Matt Lepay of Wisconsin both sat in a room and gave me feedback on my play-by-play. I even recorded a podcast episode with Steve Holman of the Atlanta Hawks. The access you get to pick the brains of the biggest stars of our business is absolutely unparalleled by any other event I’ve been a part of.

Old & New Friends: This is the fourth time I’ve attended the NSMA Hall of Fame Weekend in the last six years. The first time I attended I didn’t know anyone, and it was nerve racking to continuously make cold introductions. As I continued to make the trip to North Carolina in the following years, I found that I knew many of the same people each year. After staying in touch, many of them have become close friends, and each year coming to North Carolina feels like a reunion of sorts.

On the other hand, each year brings new people to the gathering. I met a few broadcasters who felt like I did the first year at the conference. Reaching out and drawing these people into the conversations hopefully made them feel comfortable, but also resulted in new friendships that make the reunion even bigger at future events.

Overall it was a fantastic experience. I feel re-focused with great feedback on what I need to work on to improve as a broadcaster. I want to personally thank Dave Goren, the head cheese of the NSMA, for organizing this great weekend, and I encourage everyone who is serious about the industry to consider joining or supporting the NSMA.