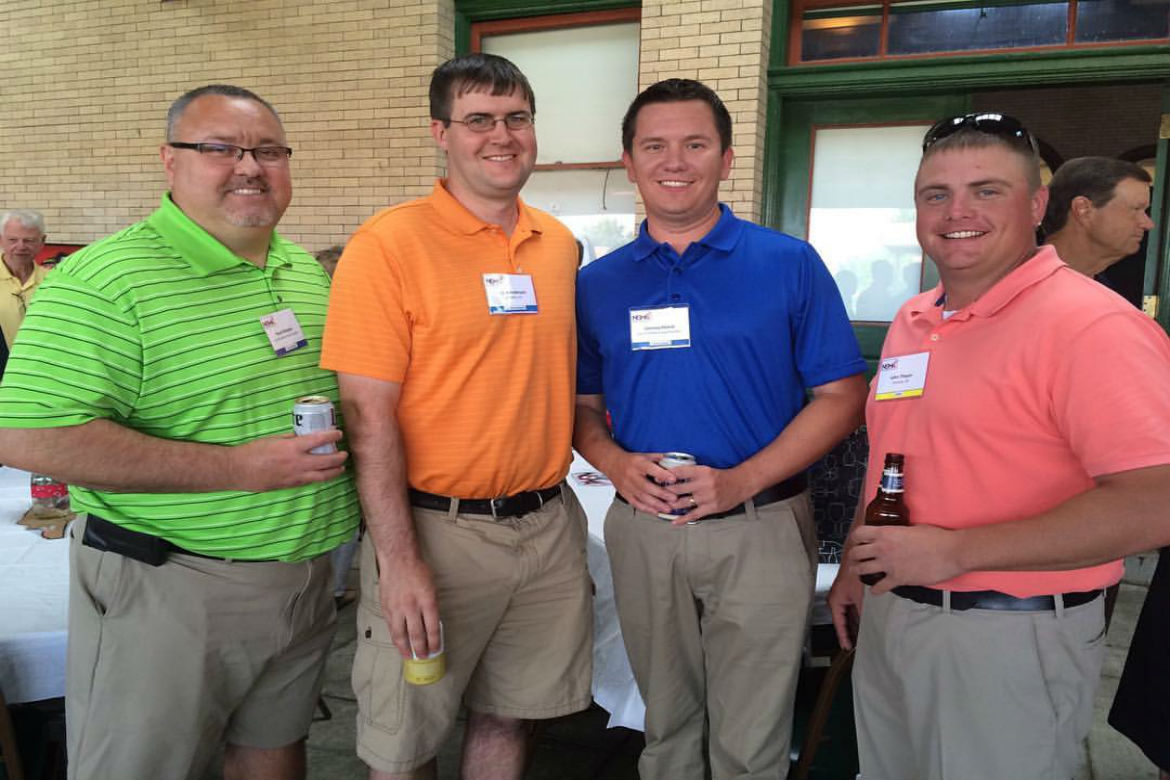 I’m back home from the NSMA Hall of Fame Weekend in Salisbury, N.C., and it was awesome. I made new friends and connections, picked up some pointers, and came back to South Dakota reenergized after a tough month of things not going my way.

These stories don’t require a full blog or podcast, but I wanted to share a few with you anyway.

Southern Hospitality: I touched on this a bit in my podcast, but I was invited to visit and stay in the home of Burch Antley, a fellow sportscaster in Columbia, S.C. I wanted to start this off by giving him, his wife Emmy, and his mother-in-law (I think her name was Patty but I’m a horrible human and can’t remember for sure) a hearty thank you. Their home was charming, their beer was cold, and they went above and beyond to make sure I was comfortable.

Burch introduced me to fellow Columbia area sportscaster Tyler Cupp, who they affectionately refer to as “T Cupp” (A- Rod has nothing on him). We went out in downtown Columbia and enjoyed tasty chicken wings and local brews at the Columbia Ale House.

On Saturday, before we left for Salisbury, he gave me a tour of the campus at the University of South Carolina. He showed me their baseball stadium, beach volleyball area, and even pointed out an old water tower that apparently an engineering student had purchased to convert into an “Animaniacs” style house before being shut down by the city. However, the highlight was finding our way into Williams-Brice Stadium where the Gamecocks play football. The stadium was open for tours because of a 7 on 7 camp nearby, but nobody was able to actually play on the stadium’s turf because it wasn’t there! They were in the process of re-sodding the field and instead of grass it looked more like it was covered in the white sands of Myrtle Beach.

An interesting side note, outside of Williams-Brice Stadium they have several old-fashioned caboose cars from trains of yore. These have been converted into tailgating destinations and are affectionately referred to as “Cockabooses.” These cockabooses are for sale if you’re rich beyond measure.

Our final stop in Columbia was the brand new minor league stadium of the Columbia Fireflies. This stadium was brand new and immaculate. The stadium features rocking chairs in the outfield, which added a nice bit of southern charm. The stadium is open all day for people who want to walk/run laps so naturally we walked a full lap. It was during this lap that I noticed a cool looking tap in the right field bar that looked like a sword. I pushed it forward and to my surprise beer started flowing out. My college self was giddy, but I’m 30 years old and didn’t need a drink at 1:30 in the afternoon so we turned it off and went about our business.

Golf trip: On Sunday, we had time during the morning/afternoon so John Thayer, Adam Hildebrandt, and I hit the local links. We played the Crescent Golf Club in Salisbury and it had almost nothing in common with courses in Aberdeen, S.D. In my area, if the track team has to run over an overpass if they want a hill. There is also not an abundance of thick vegetation that isn’t prairie grass. The course we played had lots of elevation changes and had impenetrable forest style vegetation on each side of every fairway.

Sadly, my golf game was just as bad in the south as it is in South Dakota. I bought 25 golf balls before we started and after 18 holes I was down to just four. I lost balls in the woods, the water, and I swear one of them was carried off the fairway by a squirrel.

After 18 holes, both John and Adam wanted to go back for more and I agreed. At this point my game, imploded from bad to @#$*!^% and I got so frustrated that I quit after nine more holes. I took the rental car went home to shower and picked them up after they finished their 36 holes.

Two quick additional notes: I’ve never seen anybody get as lucky hitting the ball into the woods as Adam Hildebrandt. It happened at least four times that he shanked shots into the trees only to have them ricochet back out into the middle of the fairway. If he has half the luck he has on the golf course as he does in his career he will be announcing the Super Bowl in five years.

Also, if John Thayer tries to brag to you about almost acing a shot on a par three that ended up about a foot from the hole, remind him that his first shot is still in the Carolina woods and his tap in was for par.

Meeting Doc Emrick: I was able to meet three-time Sportscaster of the Year Doc Emrick before he went up on stage. I’d love to tell you that we were at the same table at the banquet, that we were next to each other in line for beer, or that I just went up to him and started chatting, but instead we bumped into each other leaving the bathroom. We chatted for a minute or two before going into the banquet and it was one of the highlights of the weekend. We shook hands before going to our seats and I couldn’t help but wonder, did he wash his hands? Either way I may never wash my right hand again after the shake! Just kidding — at least as far as you know.

Photo Screw-Up: At the banquet, I was seated with South Dakota Sportscaster of the Year Steve Morgan. I had heard his work but we had never actually met. Him and his wife Dawn turned out to be wonderful people and I thoroughly enjoyed chatting with them. However, I left feeling guilty because as Steve was walking across the stage to get his award Dawn asked me to use my height to snap a photo from my vantage point using her phone. Her phone camera worked differently than mine and I failed to capture that special moment for them. I felt awful!

They waved it off and if they were upset they didn’t show it but I was still extremely relieved to find out that the previously mentioned John Thayer, who is also from South Dakota, did get a photo of Steve walking across the stage. They got the snapshot of their moment and my feeling of guilt was mostly lifted.